Procrastination. It’s what we writers do before we write. We sweep basement steps, wash gable windows, reorganize kitchen cabinets, or iron clothes—things we wouldn’t normally sweep or wash or reorganize except that today we need to write this blog or that story, and, well, our idea is bound to be just over there, next to those dead leaves or that smudge or the tin of sardines with an expiration date of yesterday. The words, we say, just aren’t there yet. But we know they are, and we know the idea is just waiting for us to sit down, put fingers to the home row, and type that first word.

Procrastination. It’s a word that’s been around, the OED tells us, some six hundred years and is most often something to be avoided. James Hervey said, in his 18th-century Meditations: “While we procrastinate, a fatal stroke may intervene, and place Us beyond the power of administering … any spiritual Good.” Indeed we could procrastinate ourselves into “total”—this one from an article in a magazine titled Listener—“extinction.”

On this Friday, one week after the inauguration of a new U.S. president, we find ourselves, writers, readers, artists, thinkers, teachers, hopers, and dreamers, facing what seems to many, myself included, to be the rusted-knife slaughter of all that we have come to expect, to appreciate, to trust, in our minute world. We look through our internet window to reports of the indiscriminate hatcheting of our constitutional and civil rights and the dull-spooned gouging of what it means to be stewards of this planet. As I peek through the curtains, I cannot help but wonder, are we here because of our collective procrastination, because we thought, I’ll call my senator tomorrow, or I’ll stump for someone when there’s a someone to stump for, or worse, I’m sure someone else is getting this done. Procrastination.

My other half and I started this website as a way to push ourselves toward what we’ve been calling our new north. It’s a directional shift we made over two years ago, when I enrolled in a Ph.D. program on the wings of a half-ream of recycled paper blotted with scratched-together stories about my growing-up years. I have wanted to write this book for nearly a quarter century. It sounds unfathomable that it’d take me this long to get to the heart of what has kept me from writing it. For years, I thought it was my dedication to teaching and keeping a modest house and a champagne diet. But that was just a noble yen. The reality: I have procrastinated this book since I switched my undergraduate major from Hotel and Restaurant Management to English.

Procrastination. It comes from the Latin pro-, or “forward,” and crastinus, or “belonging to tomorrow.” This book has belonged to over nine thousand tomorrows.

The OED also cites a 1964 book on trampolining that suggests we procrastinate in the hope that we will “get a slightly better bounce.” It’s why I majored in English, in fact: to get that better bounce in my words. But, the trampolining book explains, we can “prevent” procrastination if we just keep jumping. If we just keep writing. Sure. Tomorrow, I will probably wonder to myself before I sit down to write, maybe I should iron those linen pants in my closet, even though the high is only going to be 38º, or gee the pantry could use some restructuring. And maybe I’ll fumble around the soup cans and jars of jalepeños because, the truth is, sometimes there are ideas hiding under the dust of expiration dates.

For a week after the election, my writer friends on the book of face questioned, mourned, and rang out in bewilderment. I looked to them, to what they were saying and doing and feeling. I looked for a handful of those I count as my mentors, some who accepted my friendship because they know me, others because they know we are all friends, we writers and artists, teachers and dreamers. But I couldn’t find one of them. Nowhere had this person posted a single wit. Not on the book and not on the gram of insta. For three days. Then, on November 12, this person posted the image of stacks of paper divided into columns, some regular-sized sheets, others strips of varied lengths, all arranged around a chair empty but for a pen. The caption: enough dissociation….back to work. 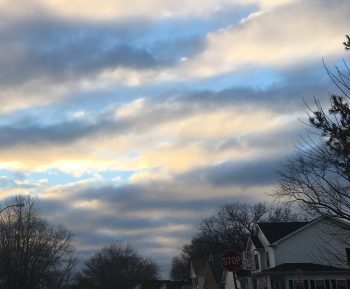